Back in time in the Village of Elephants (Ban Don village)

Buon Don (or Ban Don) village is located in Krong Na hamlet in Buon Don District, more than 40km away from Buon Ma Thuot city to the north-west. As a result of its unique geography (lying on the border between Vietnam and Laos and the border between Vietnam and Cambodia), this area of Buon Don has an abundant community of different ethnic groups including Lao, Khmer, Ede, M’nong, and J’rai as well as Kinh and several ethnic minority groups from the north. Among those ethnicities, M’nong and Lao are the most dominant.

In Ede and M’nong language, Buon means village, Ban also means the same in Laotian, and Don means islet. Together, Buon (Ban) Don means the village of islets. This name was once literally referred to Buon Don as a small island in the middle of Serepok river. During the alluvial consolidation, this place became a part of the mainland. The ancient Don Village is famous for the exceptional architecture of the grave houses, the legends about the village founder – the king of elephant hunters – Khunjunob, and the anecdotes which attract both tourists and researchers.

In this tour, you will be introduced to the distinctive cultures and customs of different ethnic minority groups in the village. You will get to visit Khunjunob’ grave house and listen to the legends about wild elephant hunting and domesticating techniques which once brought glory to the name of Buon Don village. Additionally, you will get to make friends with the elephants in the village, learn more about their habitat and their relationships with locals.

* At VCBT-N we do not encourage elephant riding. Though this activity is not prohibited and can be provided by the tour operator, we strongly advise you take animals welfare into your careful consideration. Show them love and respect through proper care and petting.

At VCBT-N we do not encourage animal hunting and domesticating, elephant included. However this practice was a part of glory part in Buon Don and we would always stay true to the past. We hope through your visit and your positive attitude towards proper care to elephants, local people are encouraged to pay attention to animal conservation. additionally, you visit opens up a new channel of income for local people and will help relieve their reliance on forest.

8 a.m. Pick-up at your hotel in Buon Ma Thuot city.

9 a.m. Arrive at Bon Don village. You’ll be warmly welcomed and introduced to the traditional longhouse of Ede people. Here you will learn about  their culture, customs and traditions. After the longhouse, you will get to visit the memorial of King of elephant hunters and elephant’s cemetery and see with your own eyes numerous tools used in elephant hunting and domesticating.

10.30 a.m. Enjoy singing and dancing performance of Ban Don people. The Ede has a tradition of welcoming their dear guests  to join to show their hospitality.

11.30 p.m. Join with locals in lunch preparation. Learn how to cook rice or grill meat in a bamboo tube

12.00 p.m. Lunch is served with specialties you have just learnt how to cook

1.00 p.m. You can have some rest or free explore the surrounding areas and take pictures of the suspension bridge, the traditional game arena.

2.00 p.m. Join with the staff in Ban Don tourism area in showering elephants, feeding them while learning their habits from local experience. A more spiritual perspective regarding rituals worshipping Elephant God will also introduced to you.

✘ Extra activities (not included in the itinerary)

✘ Handicraft souvenirs from the village

✘ Facilitator in other languages available upon request 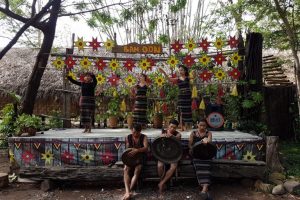 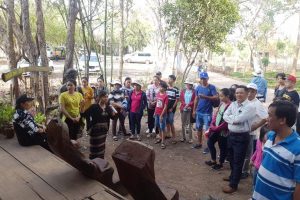 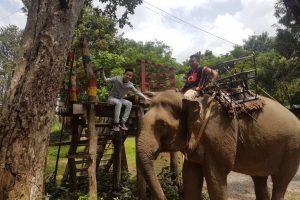 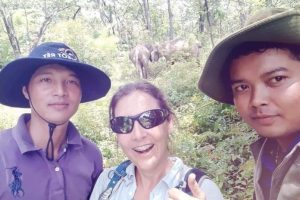